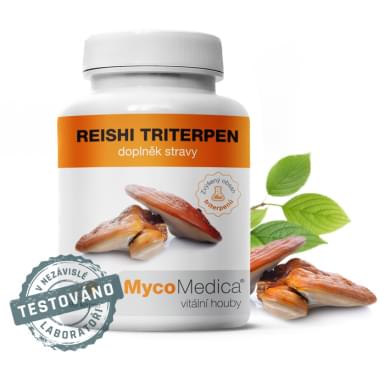 Reishi (ganoderma or lingzhi mushroom) is one of the  most used medicinal mushrooms. It has been used for its vitalising effects in traditional Chinese medicine for thousands of years. Choose the ideal ratio of polysaccharides, triterpenes and other bioactive substances for the best results. Learn more about growing our quality reishi in the article from our expedition to China. To the land where this Queen of Mushrooms comes from. The article can be found here. Reishi is used in Chinese medicine to support vitality and defenses. It has significant adaptogenic effects.
Tested in the German Agrolab. 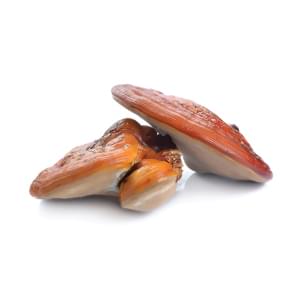 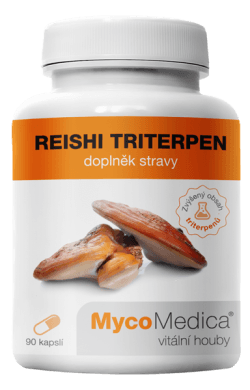 Effects according to traditional Chinese medicine

Reishi (lingzhi mushroom, Ganoderma lucidum) is one of the most valuable mushrooms in traditional Chinese medicine. Translated,  it means”divine mushroom of immortality”. Its effects have been used for more than 4,000 years.

Reishi in the ideal active substances ratio for the best results:

Reishi (Ganoderma lucidum, lingzhi mushroom) is a wood-decaying mushroom from the Polyporaceae family. We mostly find it on trunks of dead trees or stumps. Its sporocarps are semi-circular and usually have the diameter of 6−12 cm and they have a glossy lacquer layer, from which the mushroom’s Czech name (lesklokorka) is derived.

Reishi (ganoderma) has its home in Asia where it’s also called the”divine mushroom of immortality”. It’s an integral part of traditional Chinese medicine, which has been using it for more than 4,000 years. Reishi (ganoderma) is also mentioned in the basic work of Chinese medicine, in the Inner Canon of the Yellow Emperor. It was so rare in those times that it was intended only for the emperor and his family. And it wasn’t only used in Chinese medicine, but also as a powerful talisman for happiness and protection from all evil. Monks in  Taoist monasteries used Reishi (ganoderma) before meditation, for its ability to soothe the soul of Shen. It’s also used by Russian astronauts or Sherpas in the high Himalayan altitudes for its ability to regenerate and activate functions of the organism.

Reishi can activate immune responses and it contributes to maintaining a healthycirculatory system. At the same time, it helps toreduce cholesterol levels naturally. Reishi contains many bioactive substances, which make it unique. Reishi, besides vitamins, minerals, also includes a great amount of polysaccharides, beta glucans, ganoderans, and also steroids, cyclic esters - lactones, triterpenes, including ganoderic acid or lanostans, etc. We use 6-9 months old sporocarps for our production, as the concentration of active ingredients is at its highest at this age. In older mushrooms, the concentration of active ingredients is gradually decreasing and the effect is less efficient.

You can find more information about effects of Reishi at Mushroom Collection or in the section Effects.

Products on this site are dietary supplements. These products are not medicines and they can’t be used to replace prescription drugs. You can also use our Advisory centre.

The foundations of MycoMedica stand on the following strong pillars:

Emphasis on the environment

Most of our raw mushroom material comes from China. Ecology isn’t often a priority for contemporary China. Therefore, it’s difficult, but at the same time necessary to seek absolutely pure nature untouched by industry for cultivation of medicinal mushrooms. MycoMedica mainly uses mushrooms grown in in the Fujian, Anhui and Jiangxi provinces, where there are areas virtually untouched by civilisation. Pesticides, heavy metals, microorganisms, moulds, radioactivity are a danger, which raw mushroom material must be protected against unconditionally.

All the raw mushroom material we use to produce our mushroom products is tested before processing in  Agrolab, an independent German laboratory for more than 500 types of known heavy metals, pesticides and microorganisms that are harmful to humans. We are able to present these tests on request.

Classic tests conducted by the German lab. Agrolab have now been expanded with testing forpolycyclic aromatic hydrocarbons (PAHs), which have carcinogenic effects, which can affect fetal development and are also linked to cardiovascular diseases. See here.

The final production of our products takes place under the strictest hygienic conditions in the Czech Republic. For our production, we use the standards ISO 9001/2009, certified HACCP and the system of quality IFS.

What more does MycoMedica offer?

We also offer free advisory services for our products.

For larger orders, we have discounts:

We train experts in mycotherapy, who can use our mushrooms effectively in their practice. We also hold international seminars on medicinal mushrooms, these are attended by leading experts on this issue.

How to choose the right product from medicinal mushrooms?

It’s possible to produce a decoction from dried mushrooms. However, this traditional method requires a large number of mushrooms to achieve therapeutic effects.

b) mushroom powder or biomass

Dried mushrooms are ground to a very fine powder. This partially disturbs the chitin envelope and the body is then able to extract active substances from the mushroom.

We can break the chitin barrier using gentle extraction with hot water and extract the maximum  amount of active substances from the mushroom. In the case of most kinds of mushrooms, it’s also necessary to perform condensation using ethanol at the end of the extraction process (the so-calleddouble extraction ), as some active substances are water insoluble.

Extraction is the most optimal method for processing mushrooms for medical purposes. This is why the overwhelming majority of medical studies are conducted with extracts and not with mushroom powder.

The main, although not the only active substances of medicinal mushrooms are polysaccharides (mainly β-(1, 3)-D-glucans). While dried powder contains about 0.5‒3% polysaccharides, our extracts contain 30%.

Another good argument for the use of MycoMedica mushrooms is that a great many doctors and Chinese medicine practitioners are working with our products and they’ve had only the best experience with them. Seehere.

We also use MycoMedica products in our doctor’s office, so we have everyday feedback on their beneficial effects.

What to look for when choosing

Some companies use entirely common raw mushroom material for processing, in order to achieve a higher percentage of polysaccharide content. Common labs won’t recognise the difference. However, this raw material has minimal therapeutic effects. If indeed, it has any at all. Together with our German colleagues, we have been testing all raw mushroom material, so that it contains only high-quality mushroom polysacharides..

Some Chinese companies, in order to achieve microbiological purity of extracts, expose mushrooms to the effects of radioactive radiation, which destroys microorganisms. We emphasise that MycoMedica products aren’t exposed to radiation in in any phase of production.

Some Chinese manufacturers don’t respect traditional manufacturing practices. For example, mushroom drying must be done slowly and in sunshine. This is why it’s so important for us to cooperate only with proven growers and processors of raw mushroom material. We don’t use any unverified raw material in our products.

We don’t take our motto QUALITY - SAFETY - EFFICIENCY lightly. Thanks to this, we have gradually become the most important East European producer of products from medicinal mushrooms.

I‘ve been struggling with long-term skin problems. Even during childhood, I was troubled by atopic eczema, which also affected my psyche. I‘ve struggled with this problem for a long time and tried to find the best, natural solution. I encountered the Reishi medicinal mushroom and finally there was a major change. I can only recommend it.

With the advent of spring, allergies worry me. Their unpleasant manifestation is mainly an irritating cough. Reishi was very good at fixing this, and I will definitely use it again.

I use Reishi as a supplement for oncology treatment. I can say that I’m able to tolerate treatment better with this product.

I’ve been very tired of late. I began feeling fatigue after a longer illness and I was unable to rid myself of it. My friend recommended Reishi, which solved her fatigue problems. At first I didn‘t really believe in its effects, but in the end taking the capsules regularly relieved fatigue.

I can recommend Reishi from personal experience. I had problems with insomnia, and the Reishi mushroom helped me solve it. Thank you.

After problems with the urinary tract, which I dealt with by using antibiotics, there were problems with impaired immunity. Weakened immunity has led to greater susceptibility to all illnesses. Since I work in kindergarten, I’ve always managed to catch a cold or cough from the children. I decided to strengthen my immunity with Reishi from MycoMedica. The effects of the mushroom were apparent very quickly, and since I’ve been using the medicinal mushroom I‘ve had no problem with illness.

I'm very happy with Reishi. I’ve had lung radiotherapy and the use of Reishi has helped me a lot. I can only recommend it.

I’ve had a rather long and complicated delivery, whereby I felt extremely tired. I was looking for a natural remedy that would strengthen my body to help it get back to normal as soon as possible. Thanks to Reishi, I feel much better and I'm full of strength.

I ordered Reishi to strengthen my immunity. I have to confirm that it really does work. I‘ve ordered another pack.

My daughter has a problem with eczema, we‘ve tried many different measures, but they were all unsuccessful. I decided to order Reishi. I started to see visible results after the first pack, so we continue to use it and hope the effects will continue to be so encouraging.

After Reish I sleep much better.

I've had breast cancer. Throughout chemotherapy (I took Mycomedica mushrooms from about halfway through chemo) and for a while after it. I did well in chemotherapy, I wasn’t tired, I didn‘t have digestive problems and my hair grew fast. The doctors also said that everything developed very well. Now I take it after treatment. Reishi, Coriolus, and Maitake, I want to take precaution at a lower dosage.

Reishi and Mycostress have been recommended by a therapist from Mycomedica. I’ve been using them for months after problems with anxiety and mild depression. Throughout use I‘ve felt much better mentally. I hope that this condition lasts even after I stop taking the mushrooms.

I’ve recently had a heart attack, although I take quite a lot of medication, so I breathing harder and I often had pressure on my chest. I‘ve taken ganoderma (Reishi) for four months along with caterpillar (Cordyceps) and the situation is slowly regulating. My breathing is better going up the stairs and the pressure on my chest isn‘t so frequent. I certainly recommend it.

As an athlete, I need to have a strong immunity during the season. I decided to use Cordyceps CS-4 and Reishi from MycoMedica based on the positive reviews and experience of my colleagues. Not only did I go through the entire season without illness, but I feel that my stamina has increased, my body is recovering faster and I’m better prepared for another race.

I'm giving Reishi and MycoComplex to my four-year-old daughter, who was coughing for about three months, and now she's still coughing after starting kindergarten as if viruses kept coming to her. The last week she hasn’t been coughing and the virus symptoms have also disappeared. So we made adjustments on Mr Schirlo's recommendations. We eat more regularly, we have dairy and sweet. This is only difficult regarding wheat, It's in almost everything.

My liver tests were bad ... After two months of taking ganoderma, my tests were almost normal ... Regarding liver regeneration, ganoderma is better than Silybum marianum ...

Personally, I have good experience with the combination of Reish and Agaric in children's eczema ... In 3 months, it’s basically clean.

I take Reishi and Shiitake as a thrombosis prevention, which I am very afraid of. I will continue to enjoy it because I feel better overall.

Discover the power of Chinese herbs