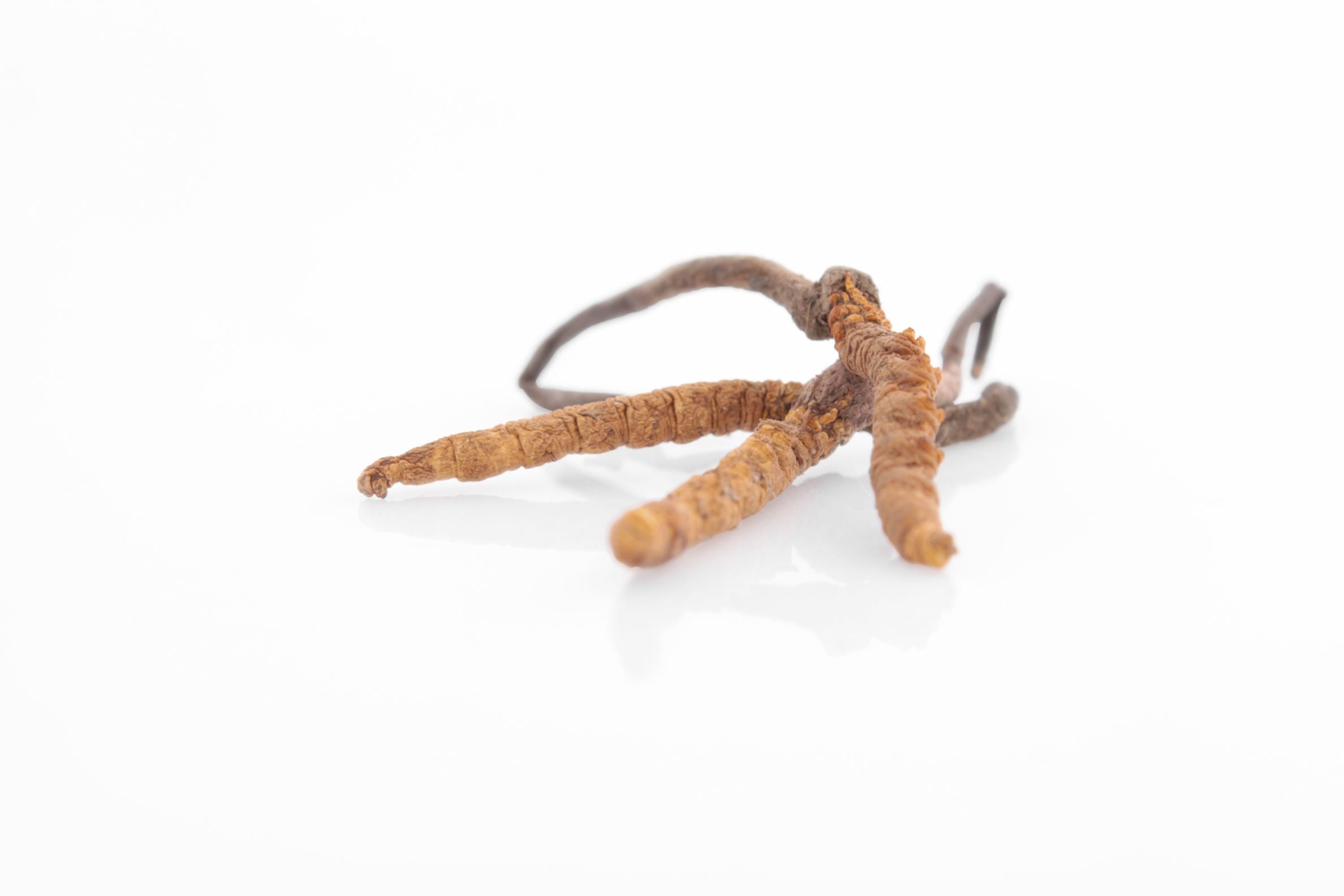 Description by the therapist:
Cordyceps is probably the strongest energy recharger of all mushrooms. Since it comes from the high altitudes of the Himalayas, it is able to stimulate our immune system and our resistance, both against viruses, bacteria, parasites, and  against stress. It supports the kidneys, their essence and yang. Essence is what we get from the ancestors. Essence is the basic force of our life. You have certainly noticed that someone lives a healthy lifestyle and yet he/she is ill, while someone else lives an unhealthy lifestyle and has a very long healthy life. This is often related to essence. The kidney essence is like a candle: when it burns down, we die. Essence is diminished by sex (male), by giving birth (women), by working too much, taking from our reserves, sleep deprivation, poor or irregular diet, long-term stress, long-lasting dissatisfaction with our state or emotional instability, long-lasting illness or alcohol/drug addiction. And essence is very difficult to replenish. Cordyceps is one of the few products able to replenish it.

Cordyceps strengthens the renal yang. This is mainly used by people generally sensitive to cold, tired and exhausted. Interestingly, it works for burnout syndrome, where patients (most often top managers) feel relatively hot. Here Cordyceps works well too.
Due to its ability to strengthen the kidneys, it is often used for infertility or various sexual problems (weak libido, impotence, poor sperm quality). Moreover, according to the Western approach, it can be used, for example, for kidney problems, such as various inflammations of the kidneys, kidney failure, etc.
Cordyceps is very commonly used in bladder inflammation; especially if the patient is at least a bit sensitive to cold, which is related to the weakened yang of the kidneys. It is often used in combination with Coriolus. Warning, only in the meantime!!! If the condition (inflammation) is acute, Cordyceps is discontinued and the dose of Coriolus is increased. Or a urological tea is given. Antibiotics should be given only in the worst case.
I often give Cordyceps for insufficient thyroid function, also associated with a weakened yang. I sometimes combine it with Reishi or Coriolus in similar cases.
It is also suitable for overweight people, if their spleen is weakened and they are again rather cold-blooded. It helps move the fluids. According to Chinese medicine, getting fat actually means the settling down of pathological fluids.

Cordyceps is not the number one choice for insomnia, but if the patient is severely exhausted, this exhaustion may cause a sleep disorder. Then Cordyceps is suitable, often combined with Reishi and Jujube.
I very often give Cordyceps to athletes. In addition to improving their immune system (being sick in the season is usually not desirable), it also improves performance and reduces the regeneration phase. I've verified this many times.

Cordyceps has a tropism to the lungs. It is appropriate to use it for various respiratory problems associated with an impaired immune system. However, it should not be used in acute conditions - colds, flu, etc. Here I often use beta-glucan in high doses.
Thanks to the ability to strengthen the lungs, it is often used for asthma, coughing and long-term pulmonary problems such as COPD or emphysema.
It is also excellent for various allergies in small children.

Along with Reishi, Cordyceps is probably the most striking mushroom with An Shen effect - harmonizing the psyche. However, I use Reishi for this purpose more often. Nevertheless, it is good to know about this feature.

Other motives for the use of Cordyceps:

Cordyceps (Cordyceps sinensis) is known under several names, such as Dong Chong Xia Cao (caterpillar in winter, grass in summer), the Chinese caterpillar, or caterpillar mushroom, Ophiocordyceps sinensis, etc. It belongs to the Cordyceps genus, which includes other species such as C. militaris, C. liangshamensis, C. gunnii, etc. (About 700 species of Cordyceps are known today). It is an ascomycete parasitic fungus. Its spores are trapped on the surface of the Thitarodes armoriacanus butterfly. The caterpillar is literally infected with the fungus and it buries itself in the soil for its next development stage. Here, however, the parasitic fungus gradually eats it alive. Cordyceps fills all of its chitin box with sclerotia, which is the basis for a ripe fungus. This cycle can take up to 6 years. In the last year, in the summer months, the fungus finally kills the caterpillar by means of the produced mycotoxins, and a head-shaped formation called stromatum literally sprouts from the head of the dead caterpillar. Stromas are reddish-brown in colour and reach up to 8-10 cm. Spores are produced in these formations, which are released again into the environment to infect other butterfly larvae.
Cordyceps grows at altitudes above 3,500 meters, mainly in the Tibet Mountains, in the Chinese provinces of Sichuan, Yunnan, etc., on plateaus. The mushroom is collected from April to August. However, it is rarely found in the wild anymore. Its incidence has fallen by 90% over the last 25 years, which of course has increased its value on the market, and that is why it is also artificially cultivated. Nevertheless, the highest-quality caterpillar mushrooms are still those from the Tibetan plateau. The price of 4 pieces can be around USD 100, 1 mushroom weighs approximately 0.5 grams, which costs about CZK 500. Due to the demand and price there are other Cordyceps mushrooms, such as militaris, on the market, passed off as Cordyceps sinensis (CS). Although they have very similar effects, they cannot really replace the caterpillar mushroom. Due to DNA sequencing it was possible to identify the CS-4 strain (paecilomyces hepialy) in 2001, which has been marketed under this name since 2005. CS-4 is considered to be the most effective strain of the mycelium of Cordyceps, which is artificially cultivated, i.e. on a substrate. The substrate was soybean at first, but there is a risk that genetically modified soybean is used, or that soya allergies may appear, there being a link between soybean and breast cancer, etc., therefore rice has been chosen as a substrate.
And why is Cordyceps so sought-after? This is mainly due to how it affects the health of living creatures, including humans. The effects of Cordyceps are successfully used in traditional Chinese and Tibetan medicine. Preserved ancient stories describe how yak herders discovered the effects of Cordyceps. The animals, which – besides grass –  grazed on Cordyceps, were more vital, stronger and healthier and  more potent. This, of course, compelled herders to use this fungus themselves. Available written historical recordscome from about 620 AD. They are part of Chinese herbaria. Cordyceps was "discovered" by the Western world only in 1726. At that time, it was introduced to experts at a mycological conference held in Paris. Although it was kept in mycological atlases, its effects were not known. This changed more than two centuries later. In 1964, Cordyceps was classified as a herbal medicine in contemporary Chinese pharmacology.

We certainly have not included everything to be found about Cordyceps in our review, if only because new discoveries about the composition and effects of Cordyceps still keep appearing. Nevertheless, we have succeeded in showing that Cordyceps is a very powerful, versatile fungus with a very complex impact on the body. Although we described each of its effects separately, it is necessary to realize that these effects influence the body all at once. Thus, it affects the immune system and at the same time regulates the level of sugars and fats, while increasing efficiency, protecting tissues, etc. Individual studies, i.e. the results obtained from them, have their limits, and one disadvantage is that there are few clinical studies, i.e. studies conducted with humans; and another drawback is that there is no standardized product that could be used in such studies, so each research group uses different extracts, different products. Nonetheless, they all come to the conclusion that Cordyceps has a positive effect on the health of living creatures, including humans. More links to studies, articles and advice can be found on our site.