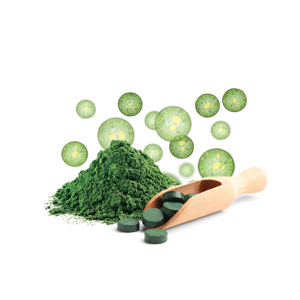 Chlorella pyrenoidosa is one of the single-celled eukaryotic freshwater algae that has high photosynthetic activity and therefore has a large amount of chlorophyll, a pigment that is contained in chloroplast organelles, and is involved in the first phase of photosynthesis at the end of which glucose is formed from carbon dioxide and water. It has a similar structure to haemoglobin, but the central ion isn’t iron, but magnesium. Chlorella pyrenoidosa has a globular shape and a solid cell wall that protects it against adverse living conditions. When multiplying, it forms a continuous biomass. It’s currently grown in large quantities then collected and processed into powder, pills, etc.