The philosophy of our company is simple but clear. We manufacture and sell products that are: quality, safe and above all effective. In order to achieve our vision, we decided to look for a supplier of mushroom raw material of the highest possible quality. The aim was to guarantee you the maximum effectiveness of our products and at the same time the absolute certainty that they will not contain any risky substances. And it wasn't easy, because mushrooms often contain pesticides, heavy metals and other things that are definitely not good for the body. This made our task all the more important: to find a supplier of the purest mushrooms that can only be found in untouched nature.

Do you drink champagne? Then you know that the only real one is from the province of Champagne. It's the same with our vital mushrooms. They grow in ecologically clean areas of East Asia, where they have been at home for millions of years. They grow to their unique potency under the careful supervision of the local community of mushroom growers, whose profession has been handed down from generation to generation.

In addition to optimal climatic conditions, our farmers have thousands of years of knowledge about cultivating mushrooms according to traditional Chinese medicine. A sufficiently long ripening period is essential. Other important prerequisites for healthy mushroom growth are clean air and good quality water. MycoMedica's premium vital mushrooms are therefore grown in the unspoiled nature of the Chinese highlands, far from industry, cities and crowds.

When selecting a cultivation medium, MycoMedica relies on thousands of years of traditional knowledge about which medium is the most suitable for a given fungus species. For this purpose, we use custom-prepared media for different species of vital fungi. This ensures that the vital mushroom grows as nature intended and develops bioactive substances that are important to the human body and its health. Reishi must be grown on good quality oak wood, whereas Chaga grows ideally on birch tree trunks.

Time and peace for full maturation

Like good wine or fine cheeses, vital mushrooms need enough time to fully ripen. Different types of mushrooms need different lengths of time for their active substances to fully develop. The ripening time therefore varies depending on the type of mushroom. Shiitake, for example, takes five months to grow, and Reishi as long as eight before its fruiting bodies fully mature. However, not all medicinal mushroom suppliers allow their products this maturation time.

It is not without reason that medicinal mushrooms thrive best in China, their home country. Contrary to preconceptions, where most medicinal mushrooms originate, there are still vast ecologically pure reserves of unspoilt nature dedicated to this very purpose. In the Chinese highlands, far from cities and conurbations, vital mushrooms have ideal conditions for growth and maturation. We have this not from the Chinese government's prospectuses, but from our own experience. We regularly visit the places where our vital mushrooms are grown. Not so much to check, but rather to develop relationships with the local farmers who help us grow them.

The strictest control of harmful substances

Fungi are inherently very susceptible to absorbing various substances from the environment in which they grow. Unfortunately, sometimes even harmful ones. Our raw materials are therefore subjected to continuous quality control since the time of their cultivation. Shortly after harvesting in China, our mushrooms are checked for purity at the site.

Each individual batch is tested for the presence of heavy metals, pesticides and other microbiological impurities. Once the goods have been shipped to the EU, another major inspection process kicks in. Samples from each batch go immediately to independent accredited laboratories, Agrolab and Dronania in Germany and Austria, without exception. It should be added that these are independent certified scientific facilities of world-class quality. Here, in accordance with EU regulations, our mushrooms undergo many different tests for the presence of pesticides, heavy metals, radioactivity, polycyclic aromatic hydrocarbons and microbial impurities. Approximately 300 different parameters are examined. We therefore follow much stricter control criteria than those prescribed by the Food Law.

The certification of the individual bags of mushroom raw material used in our products can be traced back at any time, from the finished capsule to the place of origin.

One thing is that the sponge is clean and safe. But the foundation of our work is creating mushroom products that are effective in the first place. So, in addition to the absence of harmful substances, we must also be sure that the raw material actually contains the bioactive substances it is supposed to contain.

But the market situation is unclear. The average customer has little chance to find out about the whole jungle of declared and promised active ingredients of a given manufacturer. For example, a very popular trick of some raw material processors is to replace some active substances from vital mushrooms with alternative substances from cheaper sources. For example, instead of mushroom polysaccharides, ordinary starch is added. Or instead of mushroom terpenes, terpenes from sage are added. They won't hurt, but they just won't have the effects we use vital mushrooms for.

To guarantee the authenticity, or the genuineness and originality of the individual active ingredients, we subject all the raw materials to an SEC analytical identity test called MycoPrint, which translates as "mushroom fingerprint". 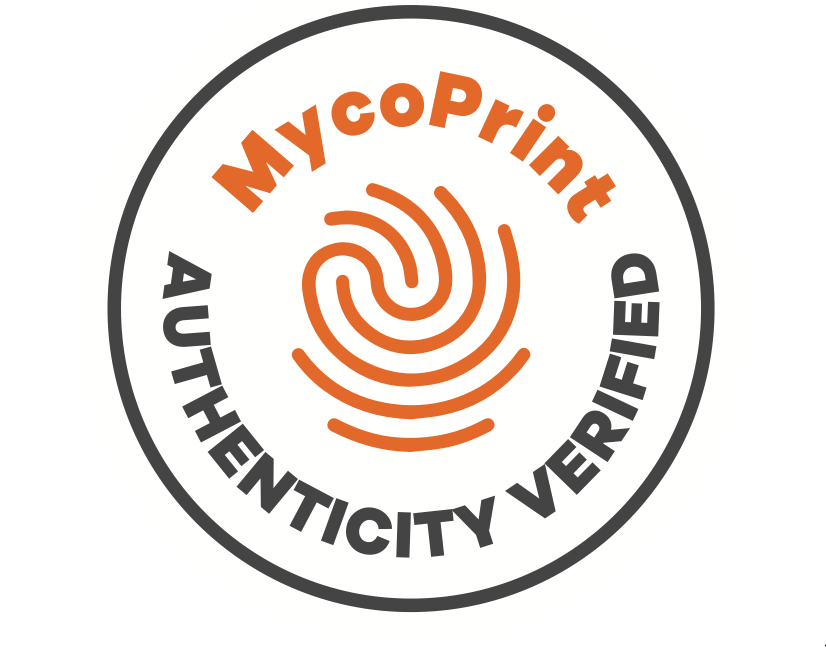 With this test, you get double assurance. Firstly, that the declared mushroom species was actually used for the extraction and that, for example, Reishi is actually Reishi. The second certainty is that the individual active ingredients have been produced in a strictly controlled extraction process. That they are there naturally and that they belong there. That they have not been artificially added to the extract just to meet some declared parameters.

Not all suppliers are able to control or correctly declare the individual active ingredients contained in their mushroom raw material. This is not an assumption, but the result of extensive market analysis at home and abroad. It can be difficult for the layman to find his way around such a market. So if you are unsure about choosing a suitable product, ask your retailer if they also test the authenticity of the mushroom extract using the MycoPrint method.

Purity according to crystallisation images

Images of crystallisation reveal the internal arrangement of different substances. The better the crystallization of a substance, the better the vital quality. An independent laboratory has compared one of our fungal products with a commercially available product that was grown on a cereal substrate, ground to a powder and sealed in a capsule with the substrate. Our product from the Chinese highlands, consisting of only the spore and no culture medium or substrate, is extremely harmonious on crystallization images. Thus, there is quite a clear difference compared to the crystallisation images of a commercially available product which contains a large proportion of mycelium and growing material in addition to the spore medium. The result of the comparison is, in our opinion, remarkable.

The final production of our products takes place at home, in the Czech Republic, directly in our family production plant in Police nad Metují. In the beautiful and clean environment of the Teplice-Adršpach Rocks. Needless to say, this is done under the strictest hygienic conditions and using the most modern technologies.

Since we manufacture our products ourselves, we have control over the entire production process, including the selection of suppliers of individual components and technologies that we need for the production of our products.

... instead of the conclusion

There's no such thing as a mushroom. Even though they have the same name and look alike. It is the same with the manufacturers of vital mushroom products. Some pretend to be makers of medicinal products, in reality they are often just after a quick profit. Some claim to understand mushrooms, when in reality they often don't even know where their raw material comes from, let alone how it was grown...

Therefore, it is clear that just as we approach the growing, selecting, testing and manufacturing of mushroom products, you should select these products. Take your time in finding the best product, the best mushroom. Research, investigate and ask questions. Read and think. Help, relief and health should be waiting for you in mushroom products. So let's make sure you actually find them there.